Intel launches Haswell Pentiums and i3 Series. But… 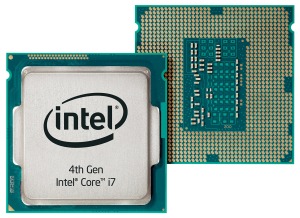 September 1st, the official launch date of the low end Haswell processors, has come and gone. On the launch list are the following:

Along with the new high end i7-4771 (a higher base clock than the i7-4770), we have a pair of quad core i5 processors, six i3 processors (dual core with hyperthreading) and six Pentium G series dual core processors.  Power envelopes are 84W for the high end models, with 65W for the S versions, then 54W for the lower end models and 35W TDPs for the low power variants.  The T and TE designations are for low power models, such that these hit the 35W envelopes typically for a reduction in base CPU speeds.

What is interesting to note is the availability of these models. In the UK, I cannot seem to find any available to purchase today, such as this i5-4440

at Amazon which is listed but not for sale.  But at Newegg, the i5-4440 is ready to purchase:

Some of the Pentiums are not listed, but some are:

The Pentium processors are equipped with GT1 graphics, whereas the other models will have HD4600 (GT2) solutions.

It seems that the UK didn’t get any this time!

This entry was posted on 2013/09/02 by Ian Cutress in CPUs, Technology News and tagged CPUs, Intel, Releases.